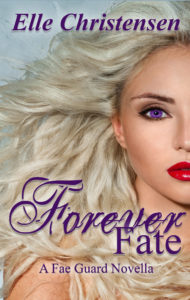 Seraphina
I loved him all of my life.
Then, he sent me away and broke my heart.
But, a millennium wasn’t long enough to erase him completely.
Now, my time as Fate is up, and he’s returned for me
I don’t know if I can let him break down my walls
But, if I stay behind them, alone,
I’ll be forever Fate.

Gabriel
Seraphina held my heart in her hands.
But, she was wild and always pushing limits.
I physically let her go, but she was always in my heart.
She’s finally proven herself.
I’ve been given permission to bring her home.
There is no other option than to win her heart, again.
She’ll forever be my Seraphina. 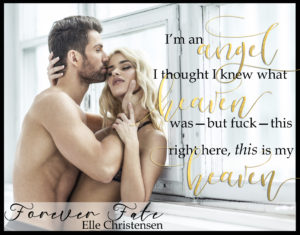 The rustle of fabric is the only indication that I’m not alone, but I remain in my seat. Today, it’s a purple velvet swivel chair. I stare out the window of my office, watching the white, fluffy clouds roll through the sky, seeming to go right around the sun, never disrupting its rays.
“Seraphina.”
The voice has my thoughts screeching back to reality, sending a shiver of want down my spine, and making my heart ache. I slowly turn my seat to face him. “A millennium and still, you’re the only stubborn ass who calls me by my full name,” I drawl casually, doing a damn fine job of hiding my reaction to him.
He raises a single eyebrow, as though I should know better. The jackass.
“Gabriel,” I emphasize his name with a high level of sarcasm. Of all people, the Arch Angel named Gabriel should understand my irritation at being namedSeraphina. I mean, dude, could we be more of a walking cliché?
I cock my head to the side, showing only mild curiosity. “I have to say, I never expected they would send you.”
He looks just the same: tall, muscular, black inky hair, cut short-ish, but perfectly unruly from his lazy curls. Amethyst eyes, a square face, chiseled jaw, Roman nose, and pouty lips (Guys can have pouty lips, too. Even GQ angel bastards), make up one fucking delicious package. And, oh, what a damn fine package it is. You ought to know, slutmuffin Mmmhmmm . . . yes, I do.
Heat infuses me and I’m really pissed at the hormone-ridden teenager lusting after him like he’s the lead singer of that popular boy band, One Track. One Direction, idiot. Whatever, fucklet, go back to your books and virgin thoughts. Go. Scat.
Well fuck, now I’m left with a bitch in heat. I stifle a groan.
“Perhaps they didn’t think you would return with anyone but me, without putting up a fuss,” his smooth, melted caramel voice is so familiar and I want to tell him to keep talking forever, but then I remember, and the stabbing pain of betrayal accompanies rising anger.
“Putting up a fuss?” I snip. “Do you see a fucking toddler in front of you?” My eyes narrow, willing laser beams to shoot out and burn multiple holes into his ridiculously gorgeous body.
“If you’re going to act like a child, Seraphina, I’ll treat you like one,” he says calmly as he moves to stand right in front of the desk, his stance deceptively casual. Yeah, right. I snort, but manage not to stomp my foot and hiss in irritation.
Instead, I sigh. “Gabriel, I haven’t seen or heard from you in over seven hundred years. Seriously, why the fuck did they send you?”
He prowls around my desk, gripping the armrests of my chair and turning me to face him. Leaning down, he has me caged in, his face inches from mine. “I volunteered.”
His proximity is throwing me off, suddenly bombarded by every horny personality inside my head. “Um—why?” I clear my throat and try to sound unaffected, “Why would you do that? Maybe—.” I gasp a little when he moves closer, only centimeters from my mouth. “Maybe I don’t want to see you.” I nod sharply, pleased I was able to say that without bursting into flames and finding myself standing next to the devil. Have I ever told such a massive and blatant lie? Only Gabriel has ever been able to push my buttons so thoroughly. Get it together, woman!
His eyes narrow, his brows dropping low, but there is no disguising the heat in them. “Liar. You’re body fucking craves me every bit as much as mine does yours.”
Before I can deny it, his lips are on mine and my traitorous body fucking melts.
I don’t love him. I don’t love him. I don’t love him.
I chant the words in my head over and over, hoping if I say it enough, I’ll believe it. I’ve spent centuries building up the wall around my heart and I refuse to let it get broken a second time by the man who destroyed it in the first place.